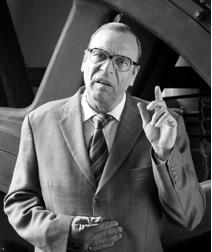 On the 26th of March, 2012 in Stuttgart the political cabaret artist Georg Schramm will be awarded this year's Erich Fromm Prize, endowed with 10,000 euro. Through the charac-ters he develops on the stage, the artist brings to life the feelings of powerlessness, anger, despair and resignation, emotions which in this society so set on success and profit are not supposed to appear. The tragedy and comedy, empathy and anger, which Schramm's cabaret unveils seek to illuminate, and transform.

What links this politically and socially engaged artist to Erich Fromm is his ability to bring to awareness what society has repressed. Fromm achieved this by analysing society through the logic of its characters; with the characters he develops and through the medium of cabaret, Schramm enables us to encounter what is shocking and what is being avoided in public.

The Erich Fromm Prize is awarded each year by the International Erich Fromm Society to a personality who „has shown and continues to show outstanding commitment for the preservation or the recovery of humanistic thinking and action in the spirit of Erich Fromm's work."

The public award ceremony takes place on March 26, 2012 at 6 p.m. in the Weißen Saal of the Neues Schloss in Stuttgart. The Laudatio for the Award winner will be presented by Thomas Gebauer from medico international. Georg Schramm himself will then deliver the Fromm Lecture accompanying the Prize on the theme: „Nach uns kommt keine Sintflut" [After us, there will be no deluge].